How to process organic fertilizer for livestock manure? 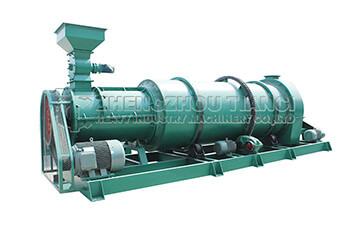 1. Dry cleaning method
(1) Compost. Use the scraping board and conveyor belt to store the feces in the empty mine site, and use them after piled. The United States and Russia use bedding grass or peat washer to transport the manure mixed with bedding to the compost yard at intervals, and use it after composting. This tradition also exists in the vast rural areas of our country. The advantage of this method is that the animal urine is absorbed by the litter, which avoids the loss of nutrients, but the loss rate of nitrogen volatilization through ammonia is relatively large, which can reach 30% to 50% of the total nitrogen. In order to avoid losses, the United States adopts high cages for raising chickens, accumulating chicken manure under the cages, covering them with straw or peat every day, and cleaning them every six months. In the United States, there is a compost production system called BIOTEC120, which was developed by Dr. Arrau after 20 years of research. It was awarded a US patent in June 1993 and was approved by the United Nations International Environmental Protection Organization. The system is composed of 10 large-scale rotating bioreactors. Through microbial fermentation, 1300 tons of feces or garbage can be processed into high-quality organic fertilizer within 72 hours. But the processing cost is expensive, and it has not been widely applied. If it can be fermented without rotation, the processing cost may be reduced.
(2) Biogas fermentation treatment. Through biogas fermentation, the odor of feces can be effectively removed. The biogas produced at the same time can be used for life and life.
Production, can achieve clean processing and renewable energy. Moreover, the biogas slurry after biogas fermentation can produce liquid fertilizer, and the biogas residue can also continue to ferment to produce organic fertilizer.
(3) Animal transformation. Through the conversion of earthworms and fly maggots into protein feed, the rest can continue to ferment to produce organic fertilizer, but this method of use is slow and the amount of processing is not much.
2. Water cleaning method
The water flushing dung is from the livestock and poultry pen. Many countries in Europe and the United States put the cleaned manure into the storage tank, and apply the liquid directly to the soil after anaerobic fermentation or biogas fermentation. The advantage is that the processing rate and utilization rate are high, but if it is transported to the field by car, the cost is not low. Even if there is a pipeline directly input into the field, it can only reduce the operating cost, and its initial investment is also high. Some countries also add some chemical fertilizers, pesticides, herbicides, etc. to these fermented liquids to produce organic and inorganic multifunctional liquid compound fertilizers. In Japan, the solid-liquid separation method is mostly used. The separated manure is used as an organic fertilizer after rot, and the separated liquid part is used to remove the particulate part in the liquid with sand and soil filter bed, or the acidification pool method is used to promote the decomposition of organic matter. The developed countries have attached great importance to the odor of livestock and poultry manure. Most of them use physical adsorption and chemical substances to deodorize. The aeration fermentation method in Japan is very effective. After 20 h at 20-40 ℃, the odor can be all eliminate. South Korea adopts trough fermentation and oil pressure rotary agitation, which is a more advanced fecal fermentation technology in the world.
Some countries in Germany and Eastern Europe treat livestock and poultry manure water through pipelines into urban sewage treatment systems for unified treatment. In general, some advanced facilities have too high operating costs and are not widely used even in developed countries in Europe and the United States. They mainly combine traditional composting methods with artificially inserted microorganisms with strong fermentation capabilities.
3. Treatment method of crop straw
The cropping system in Europe and the United States is different from that in China. Most of them are the annual cropping and fallow rotation system. During harvesting, a straw crusher is hung behind the combine harvester to directly return the crops to the field, or to implement no-tillage and mulch farmland. There are also farms that use straw silage or fermentation as feed to form animal manure and enter the manure fermentation process to produce an organic fertilizer system. In Europe and the United States, straw is rarely used directly to produce organic fertilizer industrially.

Next:How to produce organic fertilizer in municipal solid waste and how to improve the quality of compost